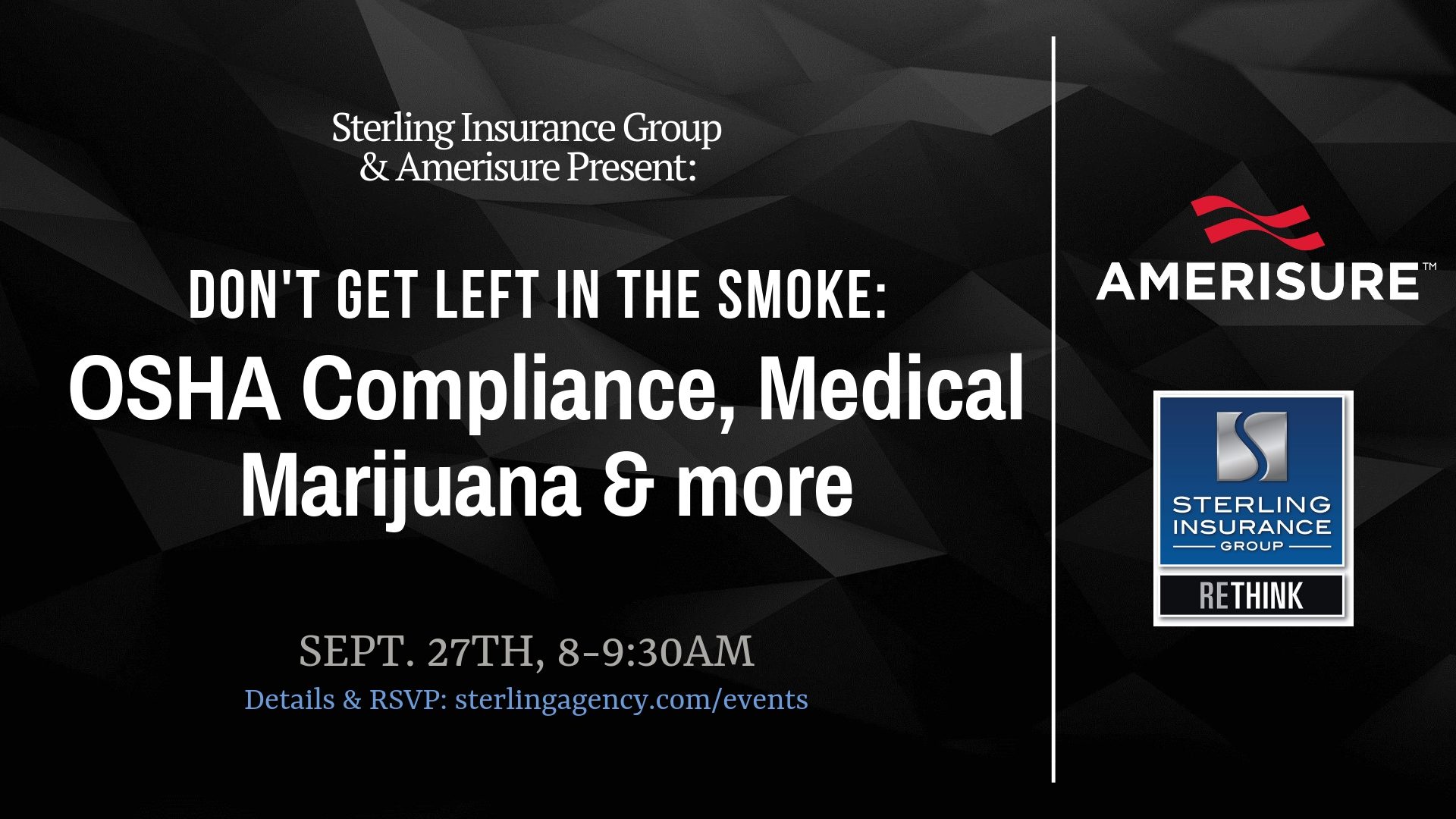 Don’t get left in the smoke: Demystifying Medical Marijuana & OSHA Compliance in 2018

Is your organization OSHA compliant these days? If you’re hiring, and your dream candidate tests positive for marijuana – but has their medical marijuana license – do you know how to proceed? These are big issues in the insurance industry currently, and they’re both causing a lot of confusion and frustration across all industries. No one wants the Department of Labor (DOL) on their case. Sterling Insurance Group and Amerisure Insurance cordially invite you their joint event: Don’t get left in the smoke: Demystifying OSHA Compliance, Medical Marijuana & more.

Be sure to RSVP for this important, timely event before space runs out!

About Todd: Todd earned his Bachelor of Science degree in Business Administration from Clearwater Christian College in 2003.  Throughout his college years, Todd interned as a Site Safety Consultant for a Mechanical Contractor in Joliet, IL.  After graduating, he joined a fee for service company as a Safety Advisor.  While working in this capacity, Todd was an active team member in promoting the safety of all of the contractors on site for one of the largest expansion projects in the history of a premier pharmaceutical company.  His responsibilities included site orientations, reviewing pre-qualifications of the contractors, conducting site audits, providing training, and assisting the contractors with accident investigation.

Later he joined a large multi-line insurance carrier as a Loss Prevention Representative.  While in this capacity, he was able to assist the policy holders with the development of their safety programs, safety committees, and accident investigations.  The types of industries he worked with were: Transportation, Manufacturing, Construction, Healthcare, and the Involuntary Market.

He has been certified as a Construction Health and Safety Technician (CHST).  He has a Masters of Science degree in Occupational Safety Management through Indiana State University.

Marijuana in the Workplace

Keith graduated from the University of Michigan with a degree in Economics.  He started his career in 2006 with The Hartford in Charlotte, NC as a Middle Market Underwriting Trainee.   At The Hartford, Keith worked in the Charlotte, Detroit, Grand Rapids, Hartford (CT), and Minneapolis offices. He also supported multiple additional markets across the country in various underwriting capacities, including the Atlanta, Cleveland, Chicago, Dallas, Houston, Kansas City, St. Louis, and Washington D.C. territories.

As VP of Legal Operations, Paul manages a Staff Counsel Operations department of 8 attorneys and 4 support staff. He also performs general legal work and supervision of complex litigation, representing Company before various state insurance departments, and drafting coverage opinions for Claims Department. Paul presents numerous training sessions for internal Amerisure employees, independent insurance agencies, and policyholders on Risk Transfer and the CGL policy. Paul joined Amerisure in 1987 as Assistant Counsel in the Corporate Legal Department and moved into subsequent roles as Associate Counsel and full Counsel by 1991. As Corporate Claims AVP until 1997, Paul managed the Asbestos and Environmental Claims Unit, and created and managed the Coverage Claims Unit. As VP/Claim Legal until 1999, Paul managed a team of Corporate Claims Consultants and the Special Investigation Unit (SIU).

Be sure to RSVP for this important, timely event!